Memorial Day in Newington is as meaningful as ever 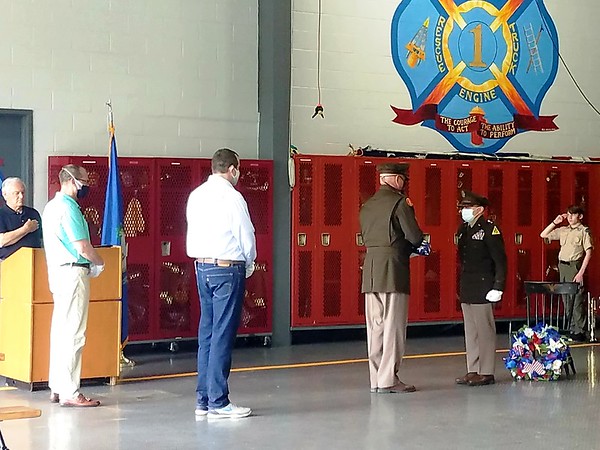 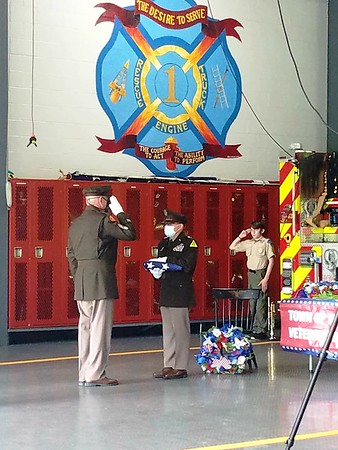 NEWINGTON – Memorial Day traditions did not go forgotten in town this year, despite COVID-19 restrictions.

While the 50th annual Newington Memorial Day Parade had to be cancelled due to the ongoing pandemic, a modified ceremony was held to honor Newington’s fallen heroes.

The Newington Memorial Day Parade Committee (NMDPC) in collaboration with the Newington Volunteer Fire Department and Newington Community Television worked hard to refocus their efforts in lieu of the parade.

The Ceremony of the Roses took place Saturday inside NVFD Co. 1 headquarters on Main Street, with a small group including committee members. It was filmed by NCTV, edited with patriotic music from Newington’s Singing Seniors and played by NCTV on Memorial Day Monday.

“Though this may be a limited ceremony it is no less meaningful,” Master of Ceremonies Command Sgt. Major Kenneth O’Brien, USA Ret. said in his opening comments. “We few gather here today to fulfill our promise to our ‘Newington 30’ and to others who have died in the line of duty since the Revolutionary War.”

Prior to the ceremony, a special tribute took place to honor the late Brigadier General John (Jack) Carragher, who was one of the founders of Newington’s Memorial Day Parade and Ceremony.

Carragher’s three sons Steven, Michael and Command Sgt. Major John Carragher made an honorary march from the intersection of Main Street and Robbins Avenue, following the usual parade route up Main Street. They left at the same time the parade was set to start, carrying the Newington Memorial Day Parade banner and the flag presented to their family during their father’s final resting service.

The ensuing ceremony’s Flag of Honor was presented for fellow parade founder the late Frank Zuraski, who survived the Battle of Iwo Jima in World War II.

Major General Fran Evon, Adjutant General of the Connecticut Nation Guard and Chairman of the NMDPC, served as guest speaker. Not only did Gen. Evon offer his own comments, he also recited a letter from a Gold Star Mother, who lost her son in Operation Iraqi Freedom.

“It’s been 15 years since our son Marine Lance Corporal Lawrence Philippon was killed on May 8, 2005,” Evon read in the letter, which was signed by the Marine’s parents Ray and Lisa Philippon.

“On the day our loved one laid down their life, Memorial Day became a part of our grief work…To our Gold Star Family, your devotion to conduct this ceremony despite the current circumstances tells us Memorial Day is circled on the calendar of your hearts…It is the overcoming efforts such as this event and the efforts of others that will be our much needed comfort this year.”

He also took the time to thank fellow committee members, the NVFD and the Town of Newington for their efforts in recognizing the importance of Memorial Day during a challenging time in our nation.

The names of the 30 Newington men who perished at war are traditionally read during the Ceremony of Roses, which would typically take place in Town Hall following the parade. This year, with the facility under construction and the coronavirus limiting the number of ceremony participants, the reading of the names was called by Chief Warrant 4 James Murphy and CSM O’Brien. After the reading of each name a bell on a fire truck tolled and a rose was placed at a facsimile of the monument on site for each of the thirty names.

A video of the ceremony is available ‘On Demand’ at NCTV.org.

Erica Drzewiecki can be reached at edrzewiecki@centralctcommunications.com.