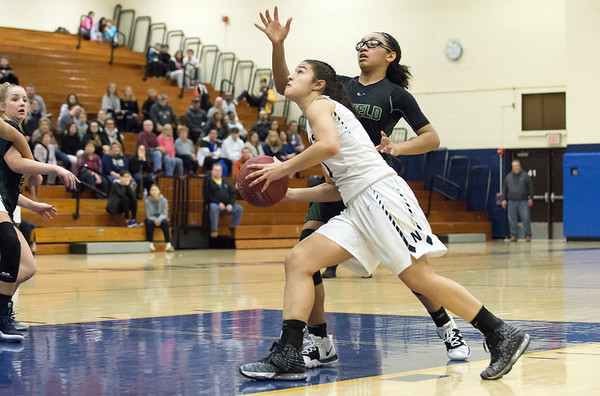 Newington girls basketball defeated Enfield on thursday night at home in the first round of the conference tournament. Sabrina Soler (1) drives past the Enfield defender. Wesley Bunnell | Staff Buy this photo
Published on Friday, 21 February 2020 11:13
Written by RYAN CHICHESTER

NEWINGTON - The Newington girls basketball team showed why itâ€™s the top seed in the CCC Tournament on Thursday night.

Hosting No. 16 Enfield in the first round of the conference tournament, the Indians opened the game with a 13-0 run and never looked back, rolling to a 67-30 win to advance to Saturdayâ€™s quarterfinals matchup on Saturday afternoon against No. 8 Bloomfield, which beat Wethersfield to eliminate the team that is responsible for two of Newingtonâ€™s three losses this season.

â€śIt would be nice to see [Wethersfield] three times,â€ť head coach Marc Tancredi said. â€śItâ€™s a little relieving not to see them, but we might see them in the semifinals of the state tournament, so who knows.â€ť

Ten different Indians players found the bottom of the net on Thursday, with sophomore Adrianna Romano leading the way with 14 points in an overwhelming performance where Newington never let its lead slip to single digits after taking a 10-0 lead early in the first quarter.

â€śThis is one of our first games where we built a big lead and didnâ€™t let the team back in,â€ť senior Ashanti Frazier said after scoring 13 points despite sitting for much of the second half. â€śItâ€™s just important to stay on top and not let off that gas pedal.â€ť

The Indians came out firing right away, getting 3-pointers from Frazier and Karissa Zocco on consecutive possessions to grab an early 6-0 lead and force an Enfield timeout. Zocco struck again from deep after an Eagles turnover to make it 9-0, and after Enfieldâ€™s fourth turnover, Marliese Zocco knocked down a short-range jumper in transition to extend the lead to 13-0 and prompt another Eagles timeout with 4:11 left in the opening quarter.

â€śItâ€™s a breath of fresh air,â€ť Tancredi said of the fast start. â€śItâ€™s a lot different from the game we had two games ago, and itâ€™s all because of the girls and their performance. They executed the game plan well.â€ť

Enfield finally broke up the run on its first possession out of the timeout, but the Indians quickly extended the lead to 19 when Morgan Ludwick was whistled for a technical foul, leading to a pair of free throws by Karissa, and on the ensuing possession, Romano drilled a straightaway three just before the first quarter buzzer.

Sabrina Soler became the seventh Newington player to find the scoring column when she muscled in a contested lefty layup to push the Indiansâ€™ lead to 21 early in the second quarter. Romano continued her strong half with a jumper from just inside the 3-point line to put Newington up by 24 in the waning minutes of the half, and a pair of free throws by Arianna Barnes, the eighth Newington player to join in on the scoring, stretched the lead to 26.

Madison Romanello became number nine with a transition layup, beating the buzzer to complete a dominant first half for the Indians.

â€śWe know what our players our capable of,â€ť Tancredi said of the widespread scoring. â€śAny time we can get production out of other people, itâ€™s great.â€ť

Alexie Armour opened the second half with a strong righty layup while drawing a foul, and after missing the ensuing free throw, an offensive rebound led to a bucket for Frazier to open up a 30-point lead. A pair forced turnovers on the next two possessions led to two more layups for Frazier, whose 13 points had nearly eclipsed the Eaglesâ€™ 14 total points at the midway point of the third quarter.

Newingtonâ€™s lead eclipsed 40 with 4:30 left in the game, when Barnes cut to the basket for a lefty layup to put the Indians ahead 62-21. On the next possession, freshman Brianna Gadarowski joined the scoring with a driving layup of her own, then drilled a three to cap off the blowout.

â€śWhen we get that lead, it helps a lot,â€ť Romano said. â€śThe start is everything. When we all worked together, it worked out.â€ť