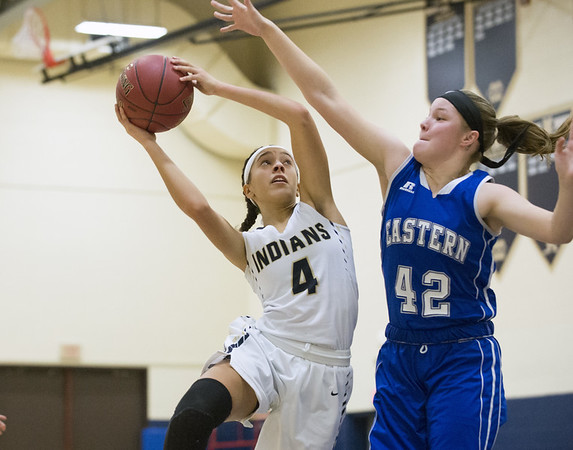 NEWINGTON - The Newington girls basketball teamâ€™s offensive leaders are unquestionably senior Ashanti Frazier and sophomore Karissa Zocco. The prolific backcourt duo accounted for both of the Indiansâ€™ all-conference selections, and currently is combining for 26.6 points per game.

But the key to a deep state tournament run for Newington might be from a different source.

Junior forward Alexie Armour is next on the Indiansâ€™ list of scoring leaders, averaging 7.8 points per game while playing in all 23 of Newingtonâ€™s games. On a team so reliant on its star power at the guard positions, Armour could be a major factor in just how far Newington can go in the Class L state tournament.

â€śSheâ€™s been our x-factor all year,â€ť head coach Marc Tancredi said. â€śDefensively, she brings a presence that not many of our bigs can offer. Sheâ€™s multi-dimensional and can defend on the perimeter and with rebounding. Sheâ€™s been phenomenal for us. Thatâ€™s why she finds herself out there with the majority of the minutes.â€ť

Like most of the season, Armourâ€™s numbers during Tuesday nightâ€™s dominant 70-37 win over Hartford Public in the first round didnâ€™t jump off the page, but still illustrated her importance. Armour logged six points on 3-of-5 shooting while grabbing four offensive rebounds, and by the fourth quarter, when the rest of the starters had long been sent to the bench to watch the rest of a game that had long since been decided, Armour was the last remaining regular on the floor, continuing to get work in and prepare for a difficult second-round bout with E.O. Smith, the CCC Tournament champion in each of the past two years.

Armourâ€™s four offensive boards lifted her season total to 109, easily the most on the team (Frazier is second with 47). Her ability to defend the perimeter, as Tancredi mentioned, is highlighted by her 21 steals, the most on the team by a forward, and her 8.5 rebounds per game is most on the team, and illustrates the pride she admittedly takes in her rebounding ability.

â€śI definitely [take pride in that],â€ť Armour said. â€śThereâ€™s a lot I can work on with rebounding and boxing out, but I feel like I do a pretty good job of it.â€ť

As she showed on Tuesday, Armour doesnâ€™t command the ball often and log a high amount of shots, but when she puts them up, they go down at an efficient rate. Armourâ€™s field goal percentage of 40 percent, which received a bump after Tuesday, is the second best mark on the team among shooters with at least 50 field goal attempts. Armour can do it all, and that will be badly needed if Newington wants to make history in the form of a state championship.

â€śI think everyone is an important piece,â€ť Armour said. â€śBut a lot of times we have our guards that put in a lot of work, so itâ€™s good to get me and Sabrina involved and rebounding and getting in the middle to distribute it out to them.â€ť

Newington can score and defend the perimeter with the best of them, but if anything could halt its march toward Mohegan Sun, itâ€™s the teamâ€™s lack of size down low. Armour and Sabrina Soler will be critical when going up against some of the more imposing forwards remaining in the tournament, and their performance could determine just how long the Indiansâ€™ season lasts. Armour has stepped up and done her part since the first game of the season, and if she continues to do so, Newingtonâ€™s last game could be at Mohegan Sun Arena.

Ryan Chichester can be reached at (860) 801-5094 or rchichester@newbritainherald.com